IN THE MOOD FOR LOVE AND THE LOVERS II: SILENCE, OBSERVATION, AND THE LIFE WE LIVE BETWEEN PLACES

Wong Kar-Wai’s film In the Mood for Love, on first reflection, seems destined to fail.

It tells the story of two neighbors who develop a relationship as they begin to suspect their respective partners of affairs. They grow close but are committed to not make the same mistakes. 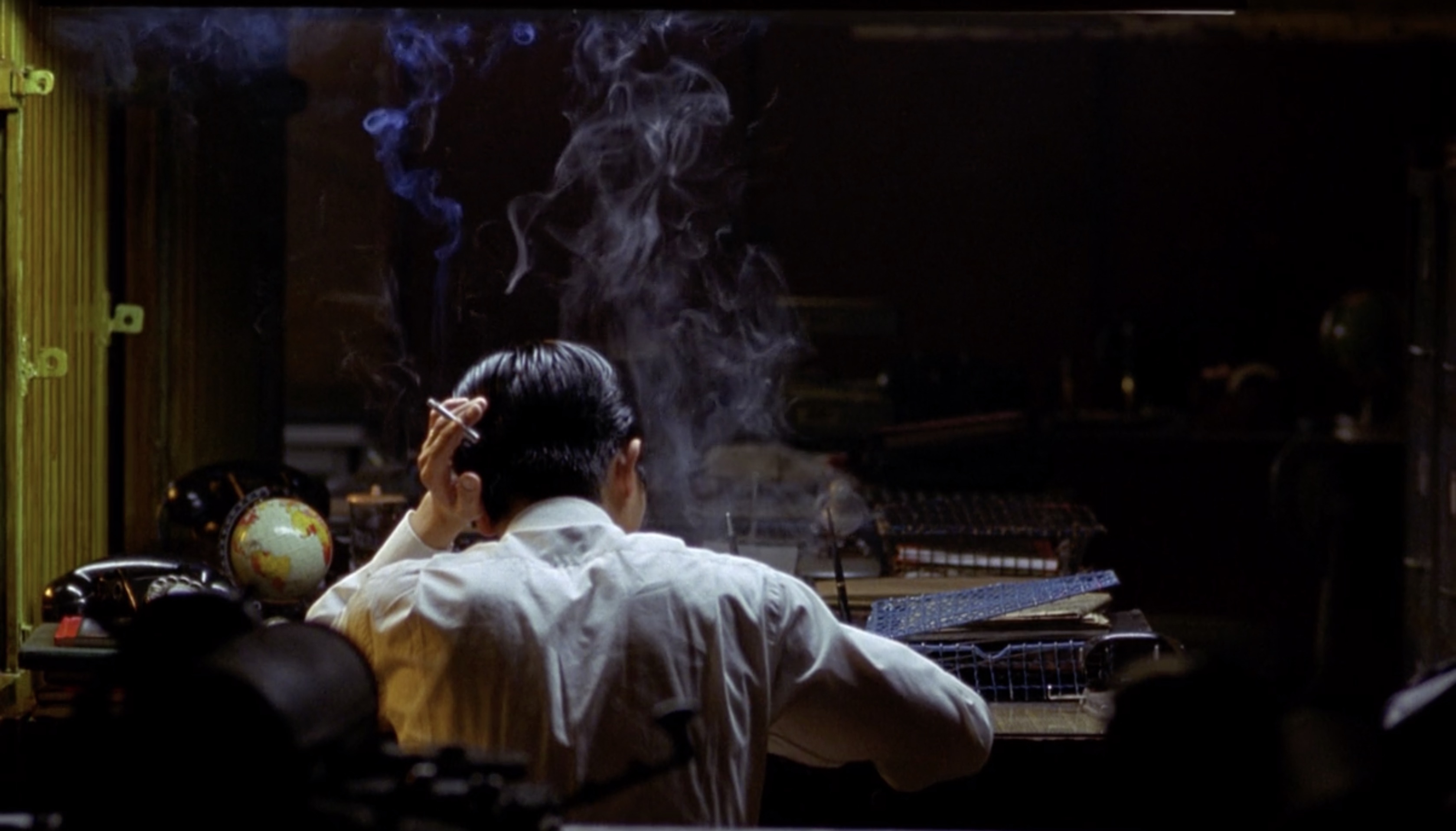 Frame from In the Mood for Love: Tony Leung's character smoking

The story is beautiful, but the medium of film seems antagonistic to the intimacy and contained humanity that Wong’s characters need. The movie must work against a number of difficult dynamics: primarily, how to present the private intimacy of the characters against the incidentally cold/observational and voyeuristic nature of filmmaking and framing.

#Negating the coldness and voyeurism of the camera

I don’t mean to say that to make a film is to agree to some kind of intrinsic, insurmountable power-dynamic, but rather to point out that there is a one-way glass between a viewer and visual art. You see but are not seen back. This relationship can of course be complicated (see: Paris Texas, A Taste of Cherry) but it cannot be removed—not that it should be: framing is an essential part of what makes visual art beautiful and meaningful.

I mean to propose, more than anything, that we as viewers should not feel entitled to characters and that a film shouldn’t simply give them to us. This is especially essential for a film like In the Mood for Love whose characters form a close, personal, secretive, but also vulnerable relationship. To prevent the camera from overwhelming the characters and the story, the film must find ways to place distance and obscurity between us and its characters. The film must also get the audience to accept this distance as an essential part of the story.

In some scenes Wong Kar-Wai provides us with a pretty direct view of his characters where we see their faces, but still his compositions are layered. The frame below comes from a shot that opens with the bottom fourth cut off. There are plants in the foreground and a partially opened window that creates an additional frame inside the shot. The room is further blocked off by the outer walls of the building. 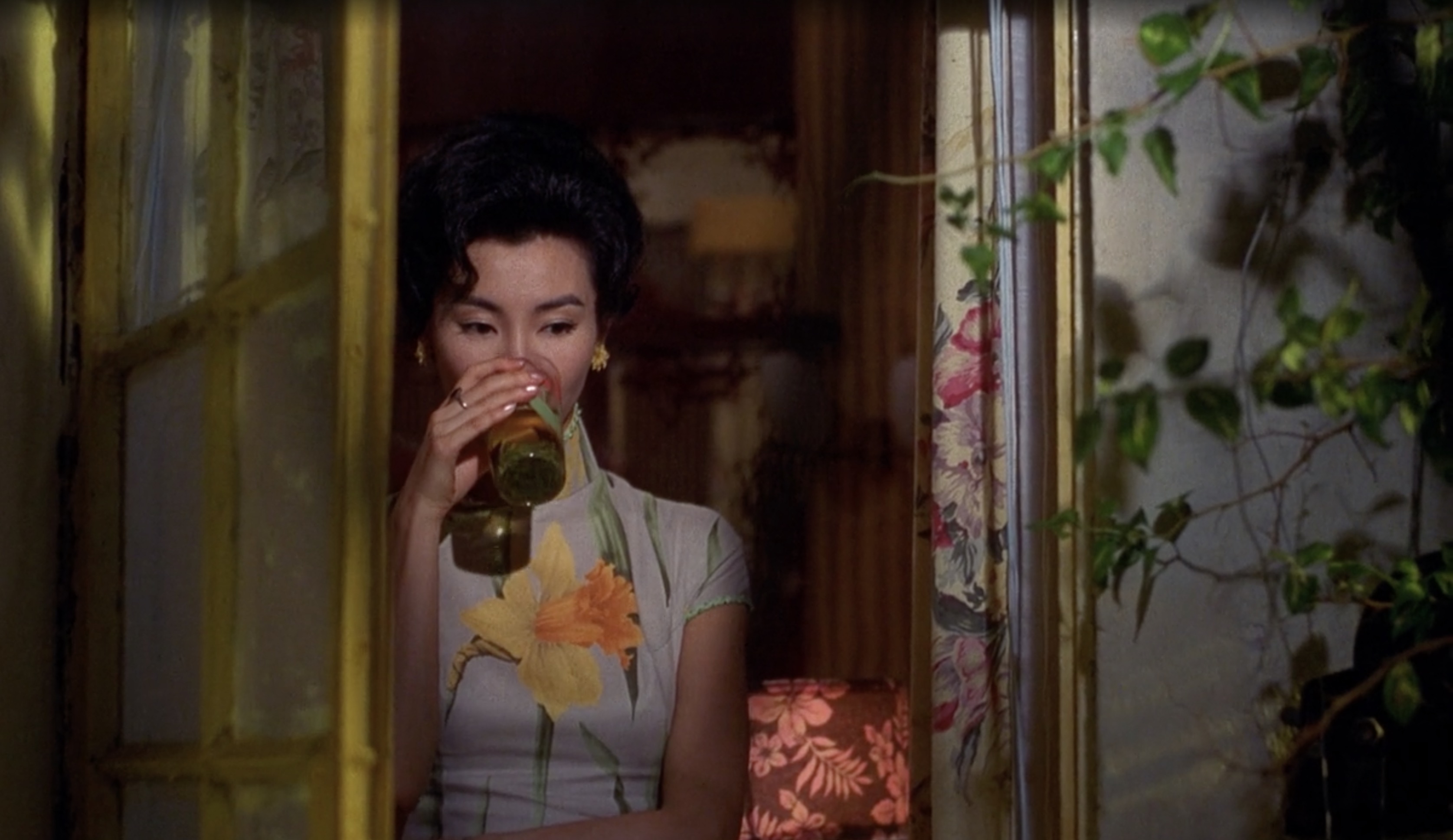 Frame from In the Mood for Love: Maggie Cheung's character drinking water by the window

The shot also reminded me of Richard Diebenkorn’s 1959 painting Coffee (shown below): both seem to offer personality through obfuscation. In both images the character’s face is blocked by a glass but made more expressive virtue of it. I believe this serves as a metaphor for Wong Kar-Wai's film: the shots and framing in In the Mood for Love are blocked but more expressive as a result. 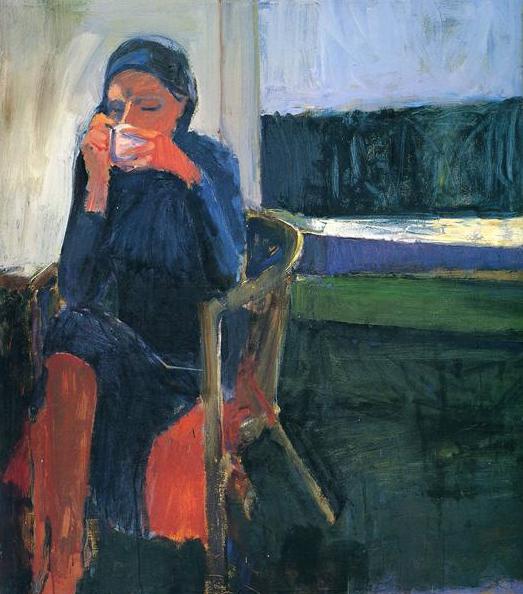 Wong consistently reframes and softens his shots. The film’s cinematography and set design take advantage of: obstructions in the foreground, contrasting colors/patterns, nested frames, orientation of characters, mirrors and reflections, repeating colors/patterns, camera movement, shadows. Each of these serve to roughen the shot: making us simultaneously more sensitive to what is inside and how we are looking, but also limiting what we can see.

This is also the reason why I love Magritte’s painting Lovers II. Though typically interpreted as a somber painting (at times, even as a reflection on his mother's suicide1), I believe there is a less macabre way of reading the painting. Lovers II can be read as a rejection of our natural instinct to possess characters and art.

Painting, even more than film, has the potential to be an invasive art: a single moment is held indefinitely. The viewer can stand in front of a painting and stare as long as they want. Watch without being watched back.

In Lovers II Magritte veils the intimate core of the painting by covering the heads of his lovers with cloth. 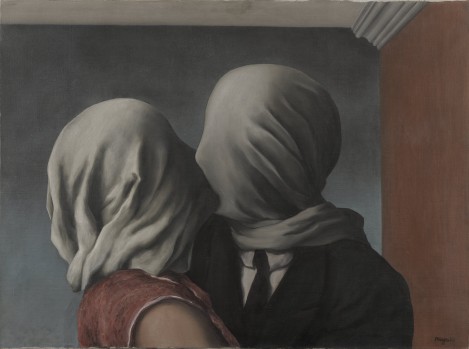 The cloth affects what we see, but doesn’t affect the lovers. They see everything that they want to see because their eyes are closed and their lips can (clearly) still kiss through the cloth. Their faces, the cynosure of the painting, are only known by the characters (each has seen the other before and sees them still in their mind).

Lovers II forces use to accept, for once, that characters do not belong to us. Their secrets, expressions, images, are buried in cloth

Though not as explicit or absolute in limiting our access to his character, Wong wants us to be aware of how we are watching and the preconceived expectations we have about movies2. For In the Mood for Love, this manifests itself not only in our expectation of transparency for characters but also in our expectations towards cinematic love.

Our desire for a romance that would contradict the very reasons we want it (and disassemble our protagonists) I will examine this idea in less depth, but I think this operational paradox is an essential component of In the Mood for Love.

In watching In the Mood for Love we want the characters to fall in love. We want romance; we want them to "get together". The whole extended final scene that teases reunion, plays off this desire.

In the Mood for Love stresses this idea continuously by not showing their partners faces and having the protagonists act out events as their partners to try to understand what happened.

Even the title In the Mood for Love seems another wink at the tension between our desire for romance and its unrealizability, by stressing the aforementioned freedom of the characters from us as viewers.

They will not realize what we want and that’s damn beautiful in its own right.